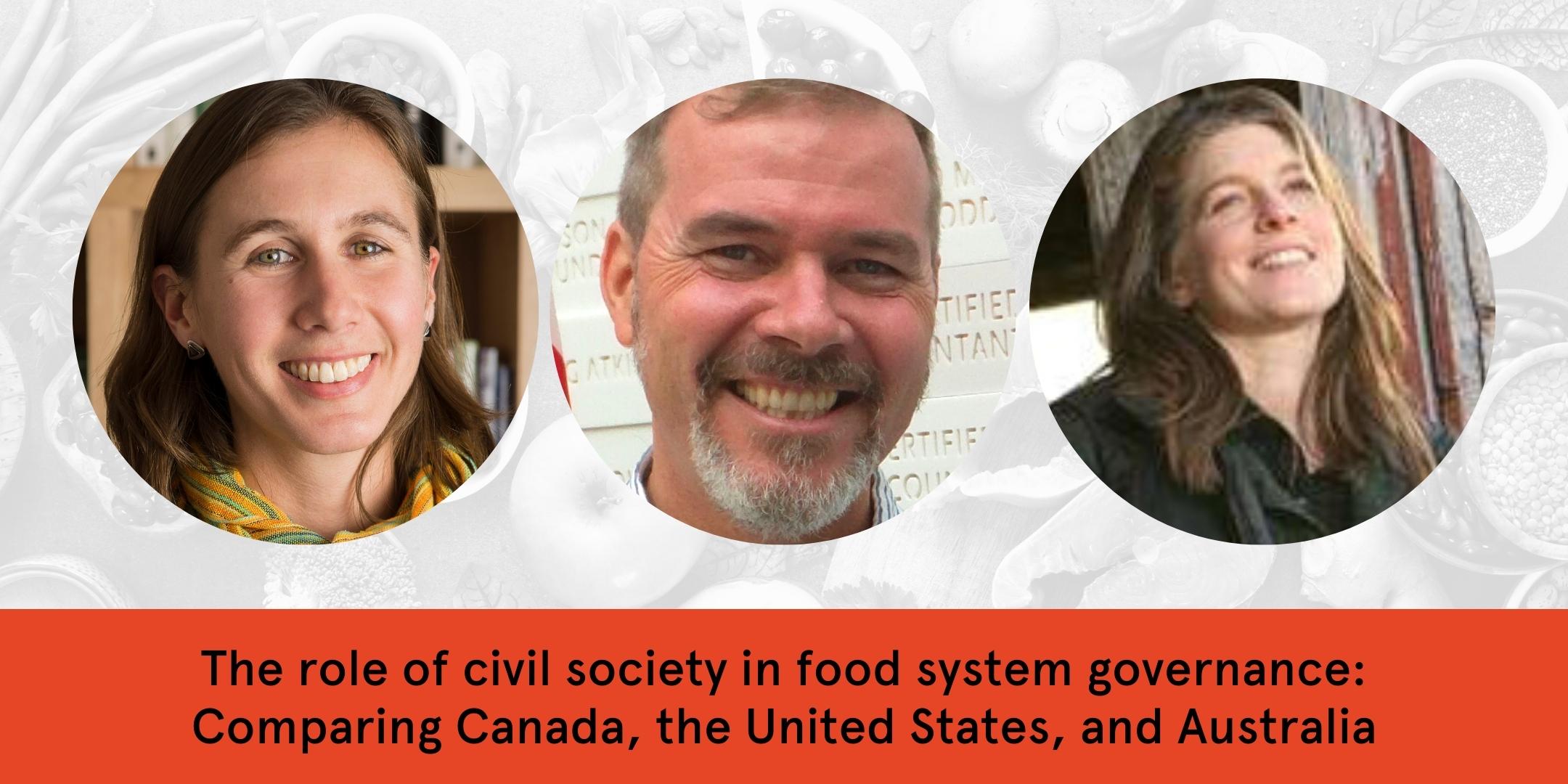 The role of civil society in food system governance: Comparing Canada, the United States, and Australia

The role of civil society in food system governance: Comparing Canada, the United States, and Australia

Join this webinar and interactive conversation to learn about how civil society organizations in Canada, the United States, and Australia are working collaboratively to influence food system policy change and decision making.

Civil society organizations are integral to food system governance. Food systems governance is not limited to laws and regulations developed by government. It also includes practices, actions, and advocacy by a wide range of actors to create policies and change decision making structures.

Recent research will set the stage for representatives from each country to share their experiences of engaging in food system governance. Discussions emerging from the webinar will contribute to future comparative research on the role of civil society organizations in food systems governance in the US, Australia, and Canada.

A second event later in June will focus on the issues of equity and inclusion in food system governance, as well as Indigenous-settler relations. Please indicate your interest in this second event when you register.

This event is supported by funding from The Social Science and Humanities Research Council of Canada and Mitacs.

7.30-7.45pm – Presentation of research on the role of civil society organisations in food system governance in Australia: Belinda Reeve, in conversation with Charles Levkoe, and Jill Clark

Moe has been working on food and farming systems issues since 1995. Since 2004, Moe has been the Executive Director of Just Food in Algonquin Territory/Ottawa region, working with teams to integrate equitable food access and a local food economy within mixed urban and rural settings with a focus on community/economic development approaches.  She is a Board Director of Sustain Ontario. Since 2019, she has supported the founding of Food Communities Network as Project Director, creating a platform to connect people working at the community-wide level on food systems change coast-to-coast-to-coast.

Karen Bassarab is a Senior Program Officer with the Johns Hopkins Center for a Liveable Future, where she manages the Food Policy Networks project. Her work involves both research and capacity building to support food policy councils and similar organizations in the United States to effectively engage in food systems policy change. Karen has a particular interest in local and regional food systems policy, collaborative governance, community engagement, and food access and the built environment. Karen earned a Master’s degree in Community and Regional Planning and Public Policy at the University of Texas at Austin.

Dr Nick Rose is Sustain’s Executive Director and a leading thinker in food system governance and urban agriculture, with over a decade’s experience in the fields of sustainable food systems and local food economies. He holds a PhD in Political Ecology from RMIT University (2013), a Master of International and Community Development (2006, Deakin University) and a Bachelor of Laws (1989, Melbourne University). In 2014, he completed a Churchill Fellowship investigating innovative models of urban agriculture in Canada, the United States and Argentina. Nick is a Partner Investigator on an Australian Research Council Discovery Project, “Strengthening Food Systems Governance at the Local Level” (2019-2022). He coordinates Sustain’s biannual Urban Agriculture Forum and its annual Urban Agriculture Month. He has published extensively on urban agriculture, local food economies and food system governance both academically and in the public domain.

This event is being held online only.

This event is hosted by Sydney Health Law at The University of Sydney Law School.

You may also be interested in this event, ‘Equity, Justice and Indigenous-Settler Relations in Food Systems Governance in Canada, Australia, and the United States’ on 15 June.